There is a friend of mine working in the best hostel in the world. She introduced me to Dom from England and on the next day we met, did some grocery shopping for cooking spring-rolls and asian soup. The guy actually have some food-blog and he also woking as chef in Cambodia and in his hometown. That was interesting for him and for me as well.

So, we bought pork, mushrooms, greens, carrot. I had onion, sugar, sauces and other shit at home.

First we started with spring-rolls, which turned to be awesome afterwards. For spring-rolls you need to fry chopped meat, carrot and mushrooms. Dom also put there curry and ginger. 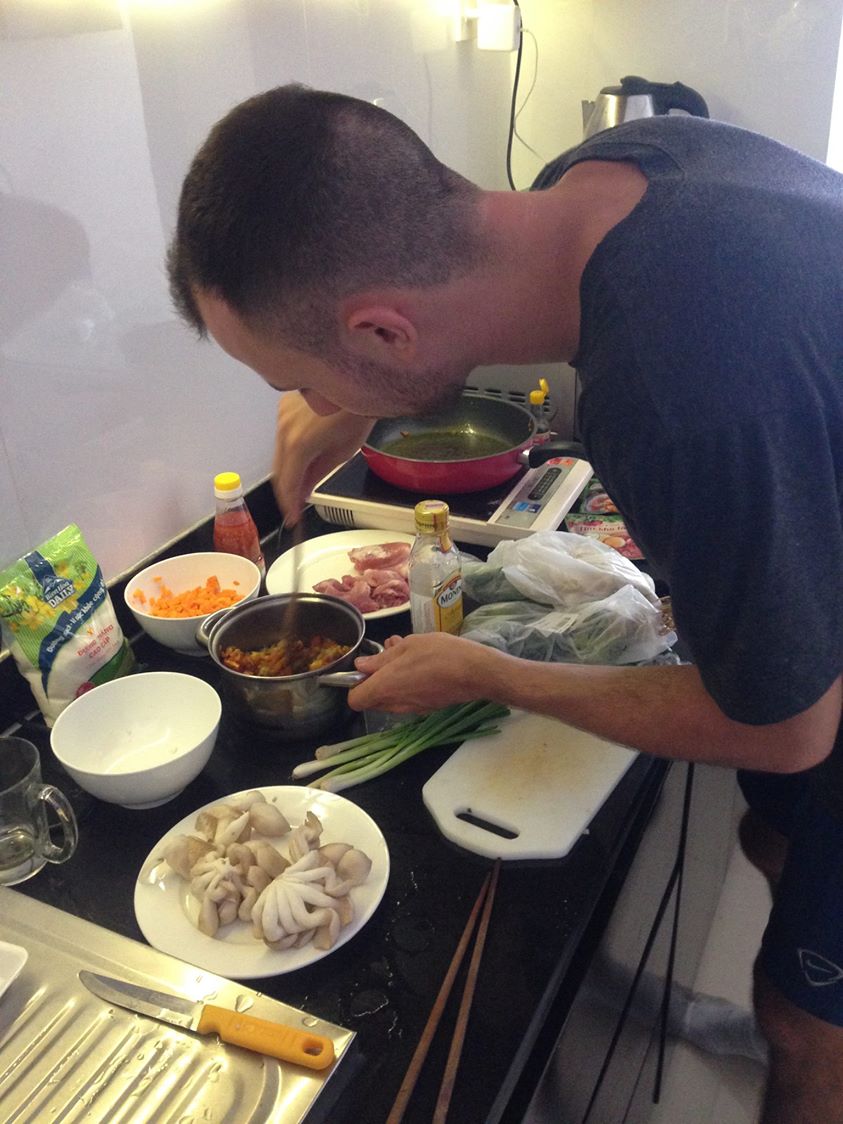 We had meat left and decided to cook asian soup which was amazing as well. For soup we take carrot and greens frying, fried meat and put water there afterwards. Bring to the boil and put noodles. So, generally this is direction for this kind of food but of course if you cook it you should always try it and make some experiments. With sauces especially.

All of my friends who came to me last evening loved this soup so much.

The other day a guy from Saigon visited my place by couchsurfing. He was originally from Pushtu region of Pakistan but from now on he lives in Saigon here. He got a teaching English job there and enjoying his life in tropical country.

He was actually one of the most fascinating personalities I’ve ever met in my life. And I spent belly good time with him.

He was my ages, he lives in the same country and we got lots of common interests.

First day, yesterday, we enjoying night life in Nha Trang. Drinking beer, visiting my favourite hostel’s party on the rooftop there, smoking shisha, drinking againg and ending up in “Why not” and “Sailing” clubs here.

Today we had some cultural program. We visited Stone Garden and Po Nagar. After that we went to the North Market to take a look. This is a picture from there, Hamza was bargaining long time in order to knock off the price for this tee to 40 dongs. Have a good trip, mate. See you in Saigon or welcome to Nha Trang once again!

Before departure from Belgrade I spent my remaining Dinars to by beer and peanuts for the road. I came to the station an hour before train departure and I didn’t know what to do. They don’t have a waiting room there, all of the benches are located throughout the station. The station is quite open disposition and there was quite cold there. I decided to take a walk, went to the grocery store for fruit. In addition to apples I found some exotic fruits called “Mushmula”, it turned out to be tasteless, it tastes like dry persimmon. The trip to Sofia was hard. I bought a ticket in common car for 20 euro but it turned out to be very uncomfortable. There were a lot of people, they were constantly going somewhere, coming and then moving again. The light was on all night and I was not able to sleep.

Customs were easy. On the Serbian side the guy just collected the passports of all passengers and brought in 20 minutes with stamp. The same thing on the Bulgarian side. No question, no additional documents, no luggage inspection. Easy. That was a good thing.

The other guy five times checked tickets. I don’t know why. Every 1.5 hours ticket control.

In the end I was sleeping perhaps 30 minutes and was woken by the train stuff. They told me that we were in Sofia already.

Ok. I got off the train and went to the tram to get to my hostel. I thought that Bulgarians use euro already, but it turned out to be false. They use they own currency – Lev (like in Moldova). 1 lev is 0.5 euro. Quite easy to count.

I changed 10 euro and got on my train.

Here is my first picture of Sofia. Finally it turned out that I chose wrong tram direction and went 7 stops (as per my hostel booking direction) to wrong way somewhere to the Sofia’s outskirts.

Got off and changed tram, went another 14 stops to the center. By the way, I didn’t pay for the tram. I thought that I could buy a ticket right on the tram but it turned out that I should have bought a ticket on the stall next to the tram stop. Fortunately there were not any inspection and I was going well.

There is a picture right in front of my hostel. The hostel is very cold. They don’t use heating but there is about only +5 degrees on the street. Madd bricks. The rest of the day I took a nap and went to the grocery store. In the evening I was sitting on the internet and working in such cold conditions.

In the morning I went to enrol to the fitness. I found on Google map and chose not large fitness club in 10 minutes from my house. 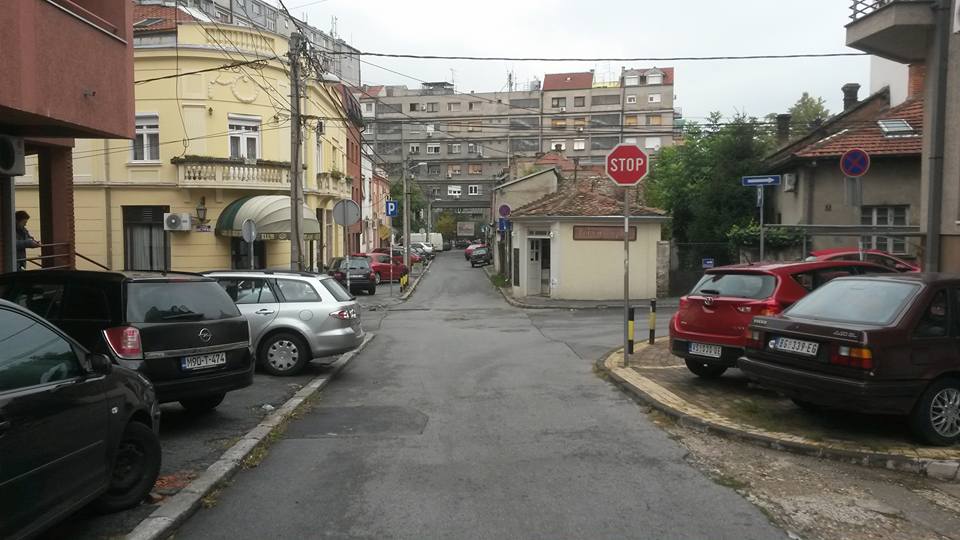 I like fitness. My mood rises whenever I go there. It became my usual morning habit along with coffee, oatmeal and running.

Also I consider that I have lived in the country if I went to fitness in it. Now I can add Serbia to this list. 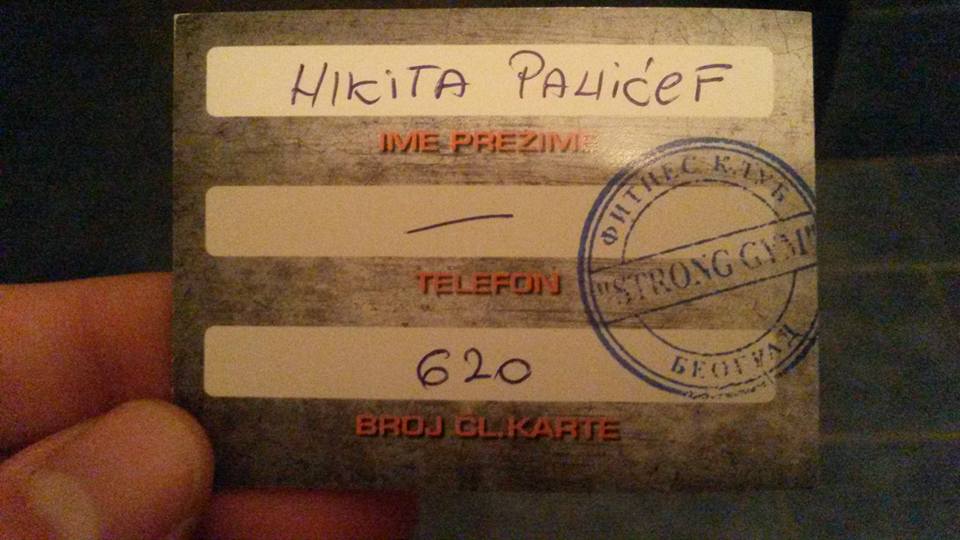 My bed in hostel. I was writing a book after fitness. Now I read “Ann Frank’s diary” in English. 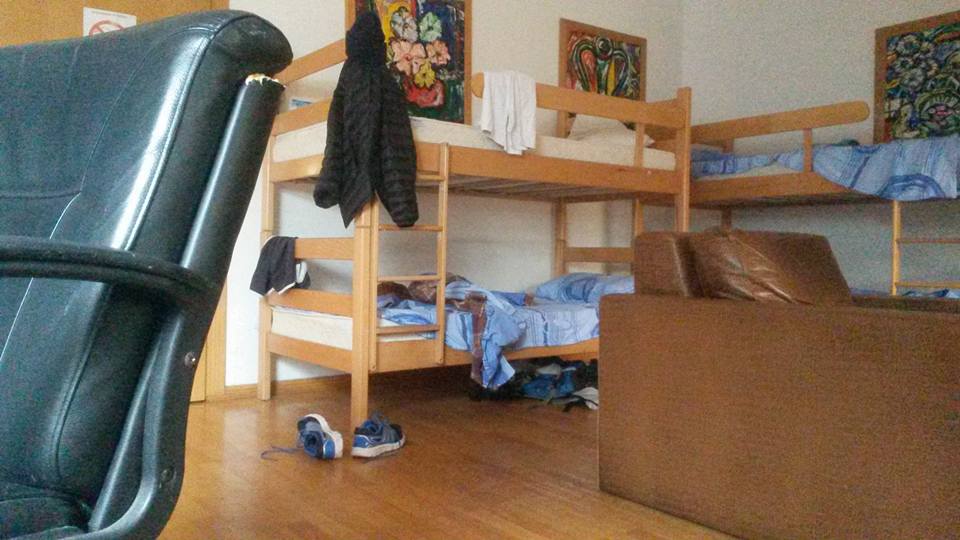 Every second store in Belgrade is bakery like this 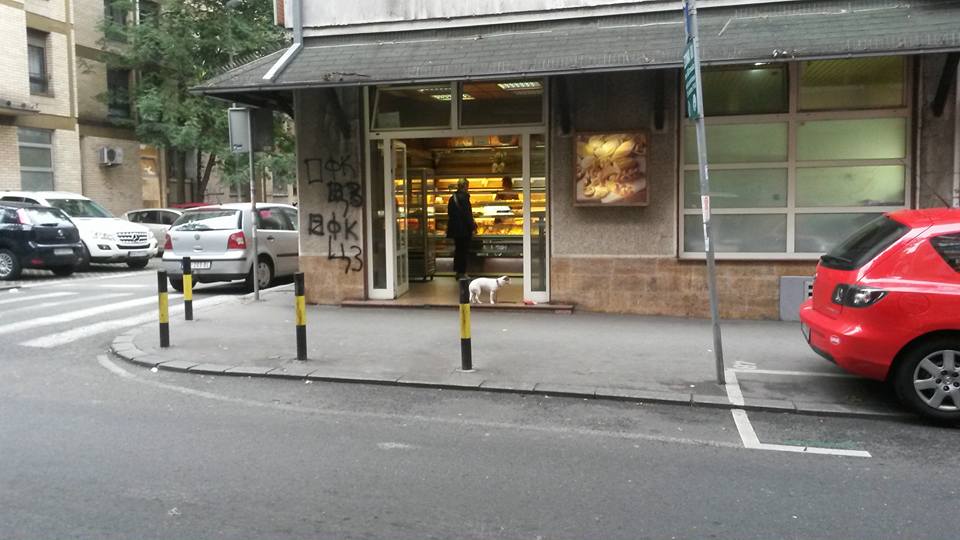 In the afternoon I went to the market to do some grocery shopping.

I was showing this picture to tradesman behind the counter in order to show her which cheese I want to buy. 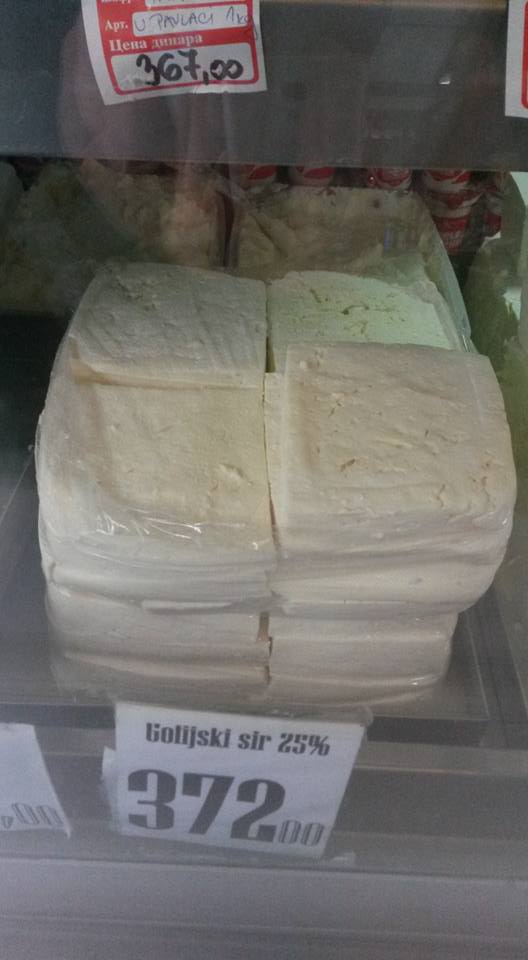 Besides cheese I bought apples and pears, tomatos and sweet pepper, a bunch of parsley, grape.

The most popular grocery supermarket in Belgrade is Belgian Delhaize. May be it’s not Belgian but I saw it there. Here it’s name is SHOP&GO. They all are pretty small here. Little bit bigger then “7eleven” in Thailand. 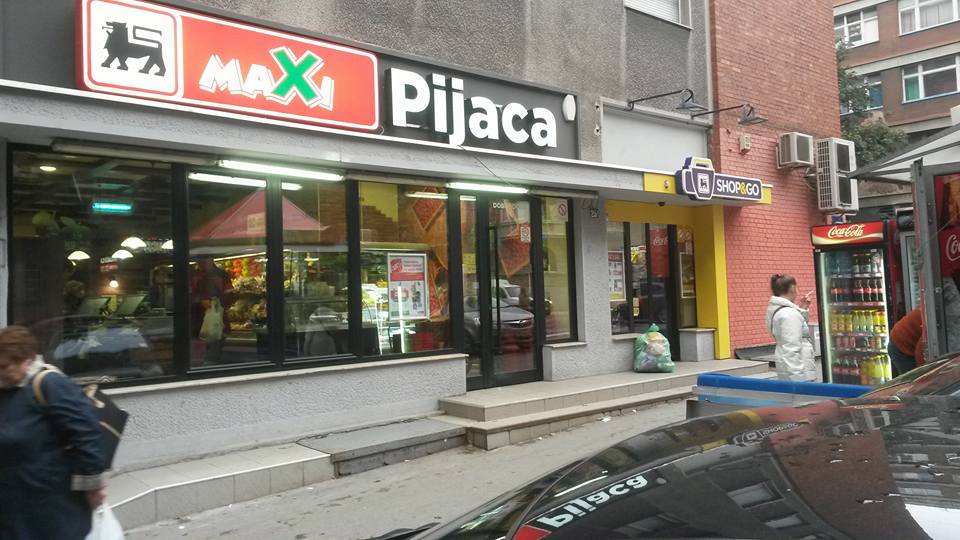 In the evening I went to the bar next to my house. I was drinking homemade wine and White Russian. All beverages that I drink in the bar you can see in my Instagram.

They still smoke in bars here. 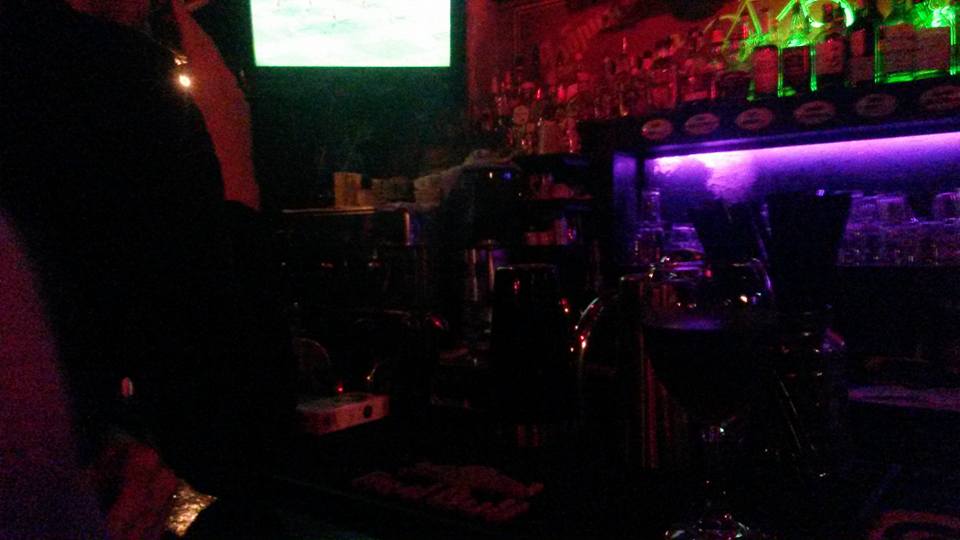 Also there was a football game on the screen, between Montenegro and Austria. Euro 2016 qualification. Montenegro played 2:1 when I’ve gone. But the game was not over.

I didn’t like my first hostel in Belgrade because of some reasons. They (hostel’s landlords, which lived there apparently, as I seemed) didn’t give me towel and they boldly smoked right in the lobby though there was a “No smoking” signboard.

So, on the next day, right after jogging and breakfast I went to another hostel 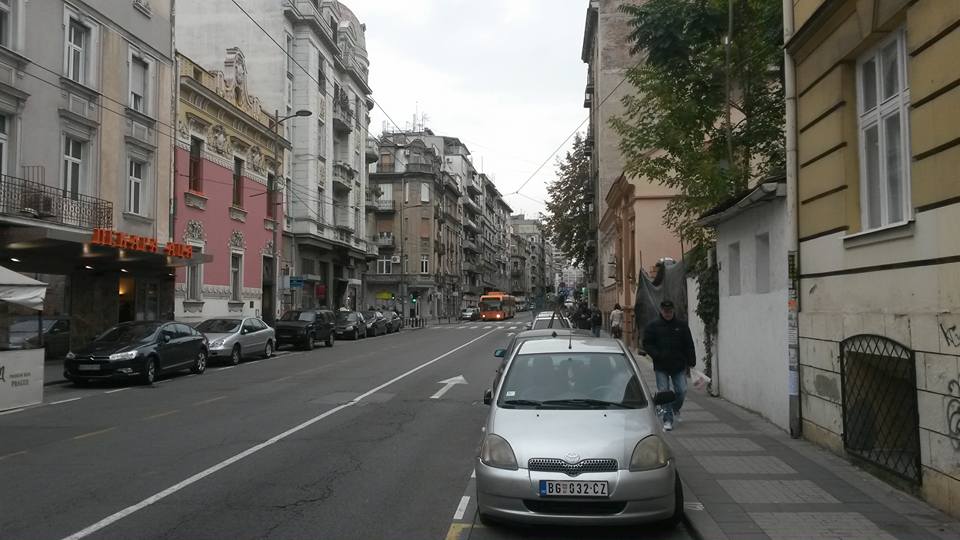 I loved that new from the first sight. There is a good receptionist girl working here. Atmosphere is good. I met one girl from Hong Kong who was the second girl from that region I’ve met the other day. There was another one on the CS meeting yesterday. There are only two types of Asian people who speak English almost fluently: Hongkongers and Singaporeans. And It’s pleasant to chat with them sometimes. All of Universities they have only in English. In Singapore they even speak English to each other. 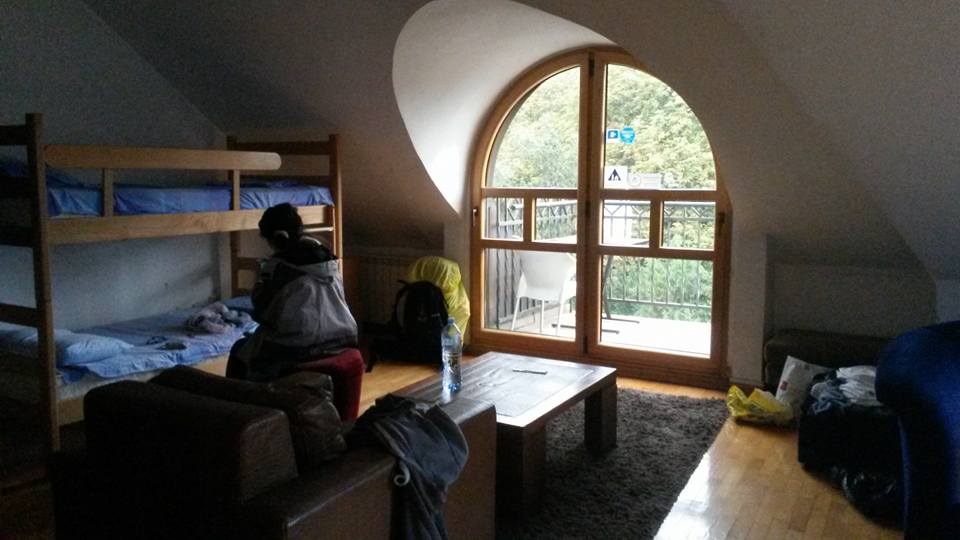 View from the balcony in my new hostel. 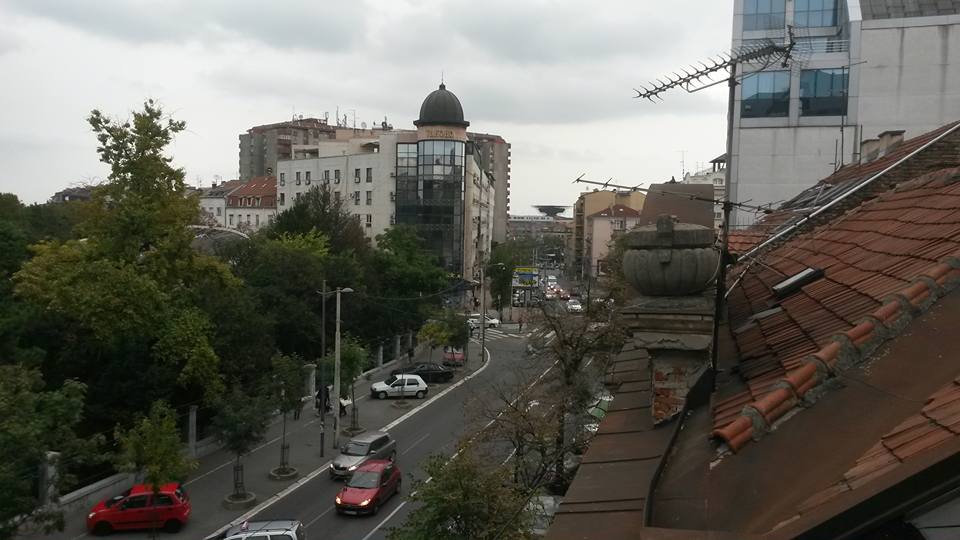 By the way, I paid for one week in advance. The price is 650 dinar (a little bit more then 5 euro per day) but they have a discount if you pay for a week. Seventh day is for free.

Then I charge my laptop and went to have a lunch. There is a cafe with takeaway food next to the hostel. I’ve eaten some cream soup and salad. 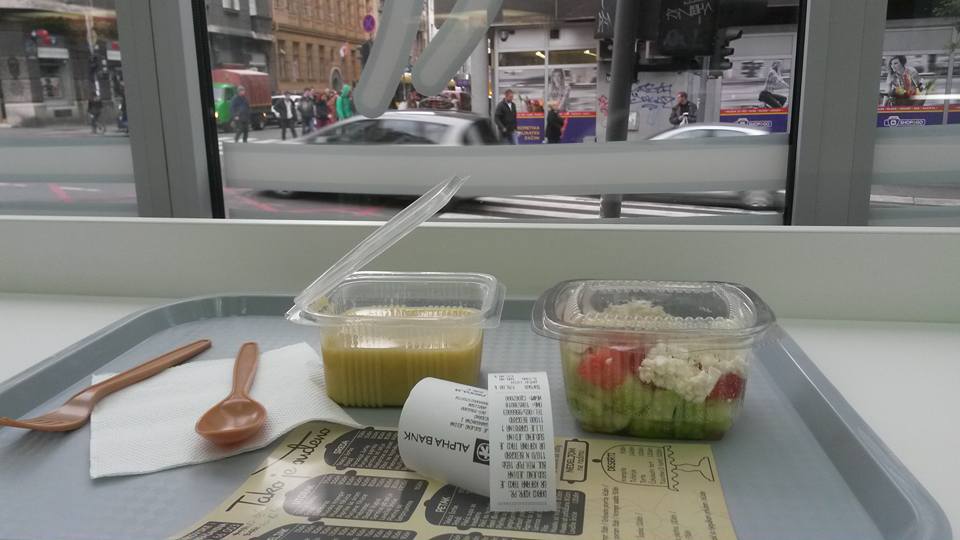 Then I was working in coffee house a little bit. Traditionally with a cup of espresso. The price was one euro in a good place. 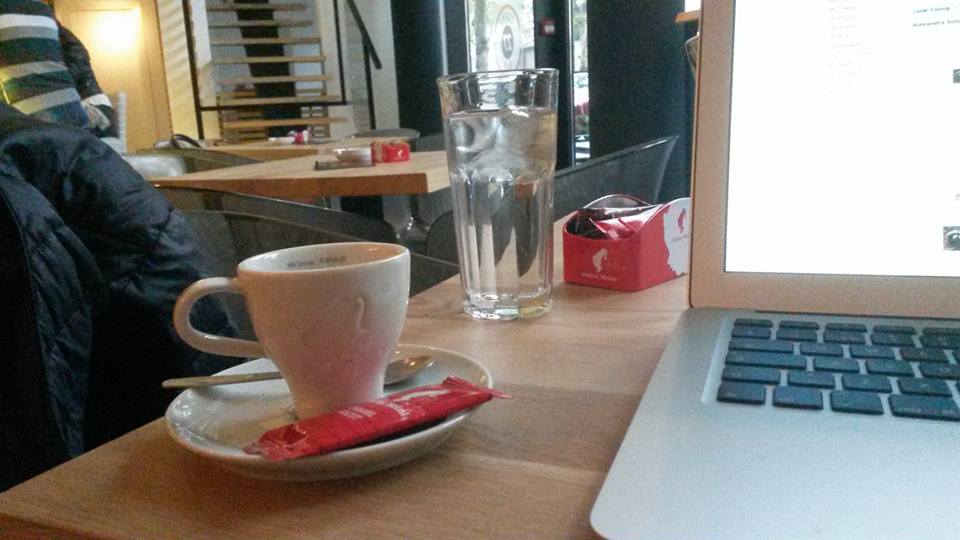